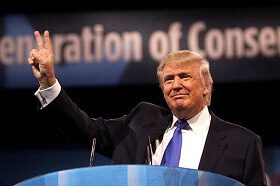 Whether you like him or not, you most likely find Donald Trump a compelling figure. The billionaire real estate tycoon and media figure has somehow used his household name and brand to become the front runner on the Republican side of the presidential race with no political experience. His persona has skyrocketed him to become one of the biggest topics of discussion in 2015.

CEOs and other corporate spokespeople would be wise to study Trump’s success. While he can perhaps be a little too aggressive for your average CEO, that doesn’t mean a lot can’t be learned from his methods.  Let’s look at a few of them.

Trump says what he wants to say, and doesn’t care what anyone thinks about it. While I would not recommend this exact strategy for anyone, there is some underlying merit. Being honest, to the point, and clear is a very important communication trait for leaders. Addressing reporter’s questions, giving confident responses and showing you truly believe what you’re saying are all great qualities.

Direct engagement is an essential element to keeping people interested. Trump is trying to gain the attention of the entire country and to do so, he engages via social media, specifically on Twitter. The public understands him because he bypasses traditional media and broadcasts his ideas directly. This is especially applicable with internal communications. While company’s speak through policies and official publications, getting to hear from the CEO directly — through conference calls, video or online chats – can help everyone in the company better understand the expectations of their leader as well as who they are as a person.

If there is one thing that Trump makes sure everyone knows, it’s the fact that he is a billionaire who built one of the largest real estate empires in the United States. Trump constantly promotes himself and his brand, and he’s not afraid to brag about his accomplishments. My colleague wrote about the value in this recently, and Trump proves his point.

A good sense of humor can have a humanizing effect one anyone — even Trump. He recently hosted Saturday Night Live, and it was the perfect opportunity for Trump to show a lighter side of his personality. While an organization’s leader must be serious about their job, that doesn’t mean not  engaging, having fun and interacting on a human level—even with media.

Taken with a grain of salt, these “Trump-isms” can help any CEO become a more effective communicator.