The Past as Prologue

As O’Dwyer’s celebrates its 5oth anniversary with its latest issue, Stanton’s CEO Alex Stanton reflects on how the media trends of yesterday are impacting today’s news consumption.

To read Alex’s thoughts, click here or scroll down.

THE PAST AS PROLOGUE: TRADITIONAL MEDIA PLATFORMS MAJOR INFLUENCE AS PR PONDERS THE FUTURE

When I look back at the evolution of the media and the public relations business and assess where it’s all headed, legacy media brands loom large.

A few short years ago, native digital news outlets such as BuzzFeed and Mashable were touted as the future of online news while traditional media outlets like The New York Times and The Wall Street Journal were written off as dinosaurs.

But as we head toward a new decade—with PR playing an increasingly strategic role in marketing communications—consumers of news have flipped the switch.

Mashable, once valued at $250 million, was sold to Ziff Davis late last year for less than $50 million, according to recode. “Mashable’s collapse comes amid increasing skepticism about online publishers that depend on digital advertising, as Google and Facebook eat up increasing amounts of that market,” recode said.

Call it back to the future, as traditional media brands rise in popularity and charge for it via digital subscriptions.

PAYING FOR NEWS YOU TRUST

With a constant stream of unreliable content circulating throughout the Web, consumers of news seem to be gravitating toward more reputable media platforms—and paying for the privilege.

But wait. Weren’t millennials—who are fast entering the decision-making ranks—conditioned to the imperative that “information wants to be free?” Fortunately for traditional media brands, millennials have bucked conventional wisdom.

Between 2016 and 2017, the share of Americans ages 18-24 who paid for online news increased from 4 percent to 18 percent, according to Reuters Institute for the Study of Journalism. Among ages 25-34 it rose from 8 percent to 20 percent.

In fact, the largest growth in U.S. subscribers paying for news content during that time frame was among those aged 18-24. 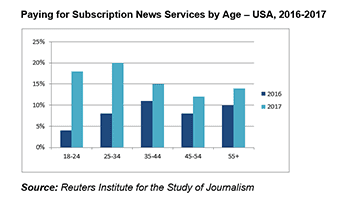 By paying for digital subscriptions, younger consumers of news not only keep traditional media sources viable, but expand the number of editorial/content marketing opportunities for brands and organizations to consider.

Legacy media brands now have multiple, integrated media channels to offer marketers, including online video, podcasting and live events, with additional channels likely to emerge within the next few years.

INVESTIGATIVE JOURNALISM ON THE RISE

Investigative journalism, which for years was a hallmark of major American newspapers and the top broadcast outlets, has come back with a vengeance in the last few years.

Leading newspaper and broadcast platforms have invested significantly to beef up their investigative teams because such work attracts eyeballs and wins accolades. The Pulitzer-Prize winning Spotlight team at The Boston Globe, for instance, has grown to six full-time staffers.

The Public interest news platforms and consortiums have growing capabilities and influence. ProPublica, the Center for Investigative Reporting and the International Consortium of Investigative Journalism, for example, are hiring more correspondents and adding dozens of media partners.  Recent and global stories produced from such partnerships include the “Panama Papers,” “Russian Trump Tower Meeting” and “Cambridge Analytica.”

A lot of the conversation within PR precincts centers on how our profession has changed more dramatically in the last 10 years than in the previous 50.

To a significant degree that’s true. A growing number of communicators are gaining a seat at the proverbial table, strengthening influencing decision-making, driving key trends and boosting our value to the C-suite.

But, in some important ways, the more things change the more they stay the same.

Legacy media brands are investing significantly—and driving cross-platform coordination—to win in the fast-changing digital arena. They are playing the long game while others are forced to focus on the short-term.  The ultimate winners are yet unclear, but the battle for mind share is good for consumers of news—and for PR professionals.