Don’t Limit Yourself to Just One News Source 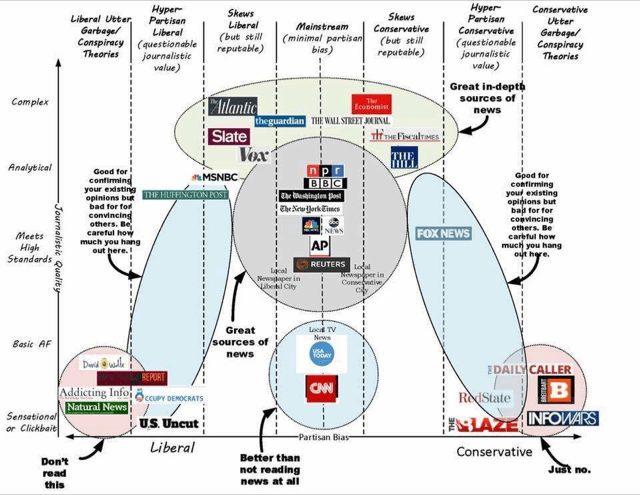 Too much of one thing is never good. Today we have access to an abundance of news sources, more than we can keep up with. Unfortunately, the sad truth is we have many options to choose from, but individuals’ trust in these outlets to provide information that is truthful, unbiased, and meaningful is at an all-time low.

Anyone who disagrees with a news story will immediately label it as “biased.” Conservatives hate CNN, Liberals hate Fox News, and everyone in the middle hates them both. The issue with bias is that it’s how we see the world, and easily becomes difficult to pull back and gather a greater perspective.

A lot of news comes bundled with lies and hidden agendas, leaving many Americans drifting in a sea of propaganda. News provided by such far left or far right media can be daunting for anyone uninformed of the larger issues behind each story. So which news outlet should you follow?

Reporting the truth is a process that starts with the professional’s discipline of collecting and verifying facts. A journalist’s credibility lies within his or her ability to provide information that’s accurate, intellectually fair, and of course seeks to inform. Some journalists fail to remain neutral and set their own prejudices aside. When journalists do let personal biases distract their neutrality, it puts the entire organization at risk.

Regardless of whether you agree with them, news outlets such as BBC, Associated Press, The Wall Street Journal, and NPR are a few of the most highly regarded news sources. Not because everything they report is unbiased, but because these sources tell the news as is; backed by facts.

So how do today’s news readers avoid unfair bias or break out of their own news biases? One way to do this is by widening your news consumption. Instead of following a small number of news outlets that feed your basic needs, it’s more important than ever to follow a mixture of sources; from elementary to analytical. It’s important readers make an effort to educate themselves on all sides of a story and be aware of different biases as they develop their own point of view.

So which news outlets should you follow? A good start is to pick three: two that oppose each another, and one you personally enjoy. This is a first step to giving you a well-rounded view, and the ability to create a well-informed opinion.